along with their Camp Fire BBQ Sauce, 2nd place in “Barbecue Sauce, American Style Mild” division.
Both barbecue sauces are available at www.step3brand.com or use the store locator to find a fine retailer near you.
Dave DeWitt, founder of the Scovie Awards and the National Fiery Foods and Barbecue Show, said there were 131 total
companies entering in the 2017 competition, with 100 winning at least one award. There were entries from 34 states and 5 countries: the United States, Canada, Hungary, Croatia, and Australia.
Fire up your charcoal grills with America’s Best Firestarter
“Stump Chunks” 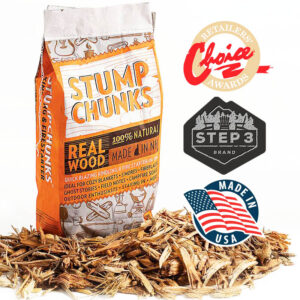